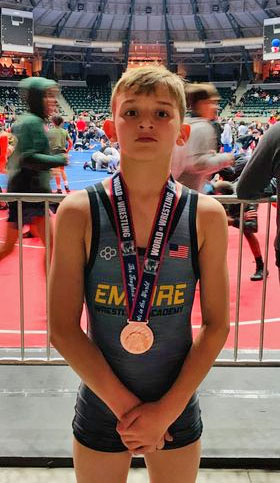 Houle went 6-2 in the tournament with four pins. After winning his first match with a pin, Houle dropped a 2-1 decision to Kane Shanger of Cincinnati, Ohio. That began a long route throught the consolation bracket for Houle.

Houle met Shanger again in the consolation semifinals and dropped a 2-0 decision in overtime.

Houle, a seventh grade student at The Master’s School in West Simsbury, finished fifth with a 12-1 decision over Michael Lopez of Aurora, Colorado. Houle trains with Empire Wrestling Academy in Somers, N.Y.

Connecticut Wrestling Online has been covering the sport of wrestling in Connecticut and New England since 2001.

Former state wrestling coach is No. 1 seed at U.S. Olympic Trials at 77 kg