No. 1 Danbury shows who is boss, beating No. 2 Simsbury, Timberlane 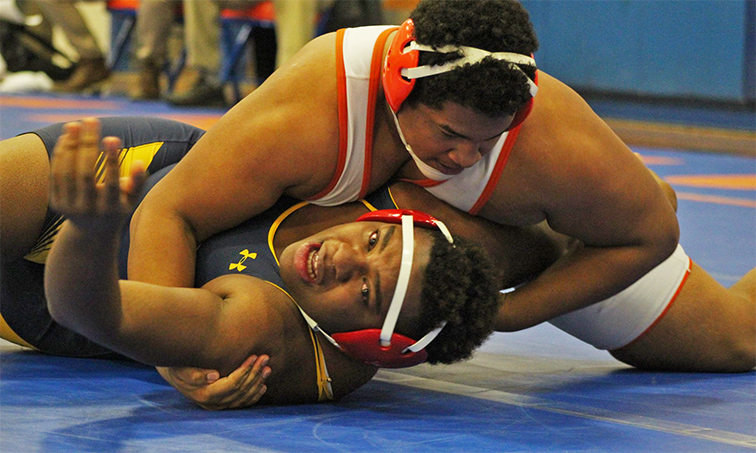 Danbury’s Jordan Agosto has Simsbury’s D’Sean Martin on his back in Saturday’s match at 285 pounds. Agosto won by pin as No. 1 Danbury beat No. 2 Simsbury. (Photo courtesy Danbury High wrestling)

The Danbury High wrestling team has been winning for so long that it’s nothing new for opposing teams to get excited for the opportunity to challenge the Hatters. Long-time head coach Ricky Shook has been going through this for years. But each Danbury team has to learn how to fend off those challenges.

No. 1 Danbury looked sharp Saturday making a statement against an excited Simsbury team that had just come off a thrilling one-point win Timberlane Regional-Plaistow, N.H., the top-ranked team in New Hampshire. Against No. 2 Simsbury, Danbury won eight of the first nine bouts of the match with six pins as they dominated in a 51-17 victory in Danbury.

Then the Hatters followed that up with a 44-24 win over Timberlane with five pins for their first win over the Owls since 2017. Danbury (12-0) made it a sweep with a victory over Nashoba Regional from Bolton, Mass., 57-21. Nashoba is ranked No. 9 in the Bay State in the latest team rankings from MassWrestling.com.

The Trojans were thrilled after beating Timberlane, 29-28 with a win by Saul Pera (145) in the final match. But Danbury quickly popped that bubble by winning eight of the first nine bouts against Simsbury with six pins to take a commanding 37-6 lead. Two of the six pins came in under 15 seconds.

“They were ready today from top to bottom,” Shook said. “A great day of wrestling for Danbury. A big days by (the kids) in the upper weights.”

They set the table and the lower weights cleaned up in all three bouts.

Ty Finn (132) won with a technical fall for Simsbury with teammates Saul Pera (145) and Carter Sirois (160) battling for victories. Sirois beat Daniel Camacho, 6-4 in the final bout of the dual meet.

Danbury kept the momentum going against Timberlane with three pins in the first four matches to take an 18-3 lead. With a major decision, the Owls cut the lead to 18-7 but Danbury won the next three matches with a decision, a major decision (worth four points) and a pin to extend the lead to 31-7.

Danbury had nine pins in a 57-21 win over Nashoba Regional-Bolton, Mass., who is ranked No. 9 in Massachusetts this week. Nashoba took a 9-0 lead by winning the first two matches of the bout before the Hatters got eight pins in the next nine matches to take command.

Simsbury’s victory over Timberlane was a thriller and when you win by a point, you get contributions up and down the lineup in victory and defeat.

After Simsbury’s Sirois (160) and Tyler Coiro (170) won their matches, the Trojans had a 9-0 lead only to see the Owls win three in a row to take a 12-9 lead. Simsbury’s D’Sean Martin (285) got a pin and Cael Finn (106) beat Timberlane’s John Fabrizo, 8-0. Winning by eight points gave the Trojans an extra point for a major decision – a crucial achievement in a one-point decision.

Simsbury’s John Mairano (145) gave the Trojans a chance to win after his 12-9 win over Adam Marquis that left the Trojans three points behind the Owls, 28-25. It came down to the final minute in Pera’s match at 152 against Timberlane’s Hale Russo.

Pera was able to turn Russo to his back in the final 20 seconds and ride out the clock to earn a 10-2 decision and four points that gave the Trojans the win, which snapped Timberlane’s 53-match winning streak.

Simsbury (8-1) finished out the day with a 52-9 win over Nashoba Regional.

NHSCA nationals in Virginia Beach cancelled due to pandemic

Ryan signs letter of intent to wrestle at Buffalo

Ryan signs letter of intent to wrestle at Buffalo