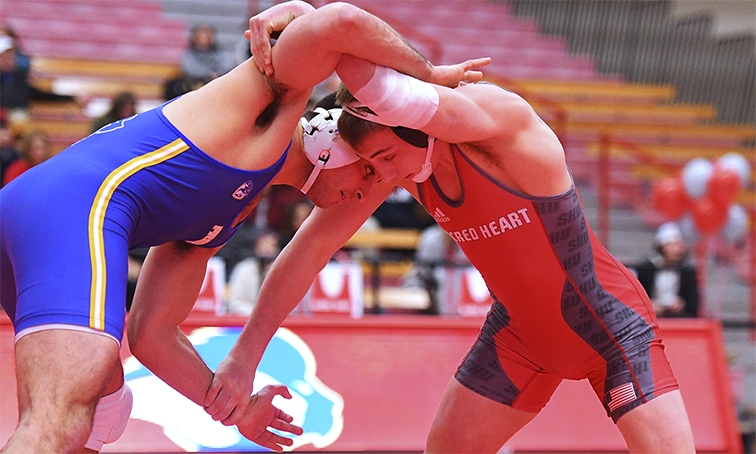 Sacred Heart swept a pair of matches on Saturday from Davidson and California Baptist to improve to 6-3 on the year. (Photo courtesy Sacred Heart University)

FAIRFIELD, February 1 – Nick Palumbo’s victory in the final match of the day lifted the Sacred Heart University wrestling to their fifth win the last six matches with a 21-17 decision over visiting California Baptist University on Saturday at the Pitt Center.

Palumbo beat Cal Baptist’s Zachary Rowe, 3-1, at 157 pounds to lift the Pioneers (6-3) to the win in the first-ever meeting between the two programs. Sacred Heart beat Davidson in an Eastern Intercollegiate Wrestling Association (EIWA) match earlier on Saturday, 27-15, to pick up a pair of victories.

Cal Baptist cut the lead to one, 15-14, thanks to three consecutive wins. Cal Baptist’s Zach Schrader got it started with his team-leading 19th win of the season at 285 pounds. Gerard Daly (141) stopped the run for Sacred Heart with a 6-2 victory over Lorenzo De La Cruz to extend the Pioneer lead to 18-14.

Against Davidson, Sacred Heart won the first five matches to take a 21-0 lead. Brandon Levesque (165) and Robert Hetherman (197) won with pins while Newtown’s Joe Accousti (174) picked up three points for the Pioneers with a 3-0 win over Steve Newell.

Davidson won back-to-back matches at 125 and 133 but Sacred Heart snuffed out any Davidson hopes with consecutive victories from Gerard Daly (141) and Nick Palumbo (149) to clinch the victory.

It’s the most dual meet wins in a single season for Sacred Heart since picking up seven victories in 2009 when the Pioneers were 7-10. The team record is believed to be nine wins set in 2003.

Sacred Heart returns to the mat when they host EIWA rival Bloomsburg University on Sunday, February 9 at the Pitt Center.