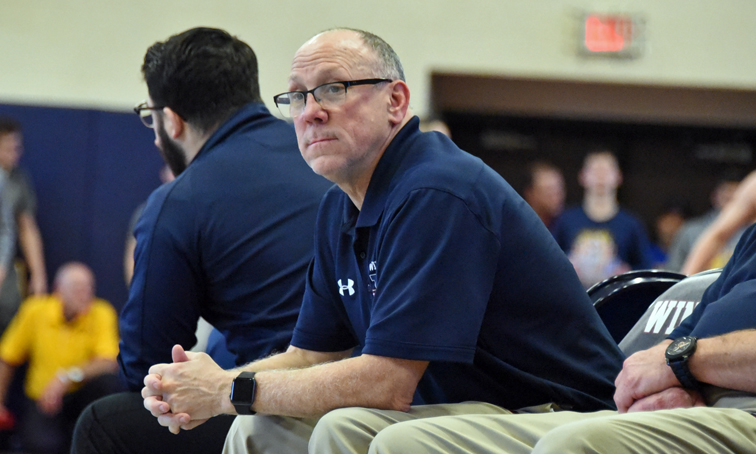 Windham High wrestling coach Patrick Risley became the fourth man in state history to win 500 dual meets as his Whippets finished second at the 11th annual Whippet Duals in Windham. Guilford (6-1) had five pins compared to four for Windham to edge the Whippets and win the tournament for the first time.

Guilford beat Waterford in the semifinals, 54-30 while Windham topped Amity, 43-32 in the other semifinal. Waterford finished third with a 51-27 decision over Amity.

With victories over Canton and Portland, Risley picked up his 500th win in pool play. He now has a career record of 501-210-2. Only Derby’s Buster Jadach, Killingly’s Rich Bowen and the late Jim Day of Berlin have amassed more than 500 career wins.

He coached several years at Plainville (1989-93) before taking over at Windham in 1999. He has led Windham to seven state championships – five in Class S, including five in the last seven seasons, and two in Class M. His Whippets have finished second in Class M five times and once in Class S. Risley had led Windham to three Eastern Connecticut Conference championships in 2004, 2015 and 2015.

With seven individual champions and eight finalists, No. 2 Fairfield Warde kept the championship trophy for the 11th annual Warde Invitational right at home in Fairfield. The Mustangs easily won the tournament for the seventh consecutive year with a 268½ to 178 win over No. 6 Staples-Westport. Middletown was in third place with 154 points.

For the second straight year, No. 1 Danbury captured the 52nd annual Spartan Wrestling Annual Tournament (SWAT) in Sanford, Maine. The Hatters again beat Timberlane Regional-Plaistow, N.H., 250-221 to win the championship. Danbury and Timberlane were first and second in the tournament a year ago. Xavier was third with 198 points – their highest ever finish in the tournament.

Mt. Anthony Union was too strong for No. 7 Southington with eight victories to win the Ray Southland Memorial Duals at Southington High with a 60-18 victory. The 15th annual event was renamed in honor of the late referee and Meriden middle school principal who died last July.

Southington (5-2) won three matches in the tournament including a 47-31 win over Greenwich in one semifinal. The Patriots, who won the tournament for the fifth time and the first time since 2017, handed Platt their first loss of the season in other semifinal, 54-27. The Panthers (10-1) took third with a 45-33 decision over Greenwich.

It’s been nearly a quarter century since Bristol schools dominated the Bristol Central Invitational. On Saturday, No. 4 Bristol Eastern and cross-town rival Bristol Central finished first and second, respectively, in the 38th annual tournament. With three individual champions and four finalists, Eastern won for a record fifth straight time, 210½ to 165 over Central. Eastern has won the tournament 11 times.

Eastern’s Ella Nichols (145), who is one of two Connecticut girls to be nationally ranked (seventh at 144), made her varsity debut in the tournament and finished fourth with two victories.

No. 4 Xavier rallies to beat No. 2 Simsbury for Class L championship