Newest version of the state wrestling record book is issued 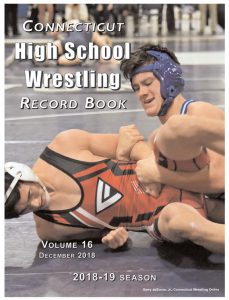 AVON, Dec. 4, 2018 — Connecticut Wrestling Online is proud to release the 16th edition of the Connecticut High School Wrestling Record Book, recognizing the achievements of athletes and coaches on the mat here in Connecticut.

There were several notable achievements since the last record book was issued two years ago.

Ledyard extended its record of the most wins in state history with 842 wins. Coming in second is Danbury with 827 win. Windham (819) moved past Conard (805) into third place for most victories by a program.

Coming into this season, the longest active dual meet winning streak belongs to Bristol Eastern, who have won 36 in a row including back-to-back undefeated seasons in 2017 (15-0) and 2018 (19-0).

Last winter, Derby High wrestling coach Buster Jadach became the first state coach with more than 600 dual meet victories. Jadach, a member of the Connecticut chapter of the National Wrestling Hall of Fame, has a career record of 609-254-5.

If you have information for the record book, please send it to Gerry deSimas, Jr., editor at CTwrestling7@yahoo.com.

Foran’s Ryan Luth, right, defends against a takedown attempt at the finals of the New England championships in Providence last March.