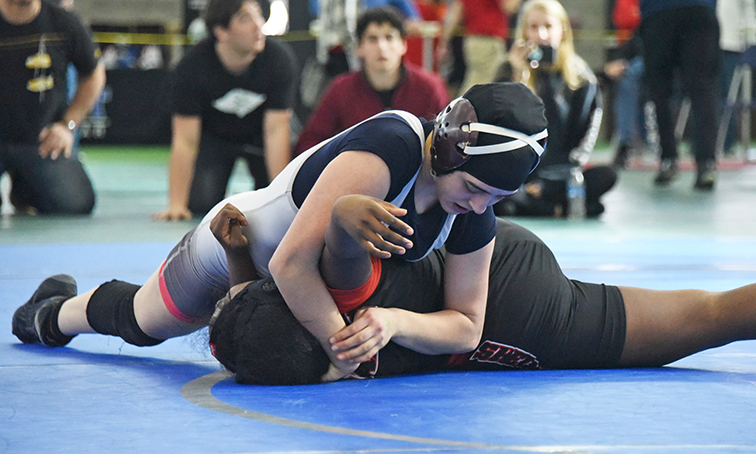 BARKHAMSTED, May 14, 2020 – Northwestern Regional senior Lily Schwartz has been selected as the Connecticut winner of the Tricia Saunders High School Excellence Award from the National Wrestling Hall of Fame.

Schwartz is the third girl from Connecticut to win the award.

She wrestled four years with Northwestern Regional in Barkhamsted. She was co-captain of this year’s team that went 9-1 and won the Berkshire League championship. She wrestled in the first CIAC Girls Invitational at 126 pounds and finished second. She had two pins in the tournament.

Wrestling against the boys this winter, she was 10-17, including a 1-2 record at the CIAC Class S tournament. She got an escape with 19 seconds left in regulation to earn a 5-4 win in a first round consolation match. Twice, she wrestled in the Class S boys tournament, also competing as a freshman.

When she was a freshman, Schwartz’s father, Andrew, was coach of the Highlanders and she had hoped to be a team manager. But there was a hole in the lineup so she hit the mat to help out and has been wrestling each year since. As a freshman, she had two brothers on the team and Northwestern won the Berkshire League championship.

“It brings us great joy to recognize these outstanding female wrestlers, who have excelled not only on the wrestling mat, but also in the classroom and in their communities,” said Lee Roy Smith, Executive Director of the Hall of Fame.