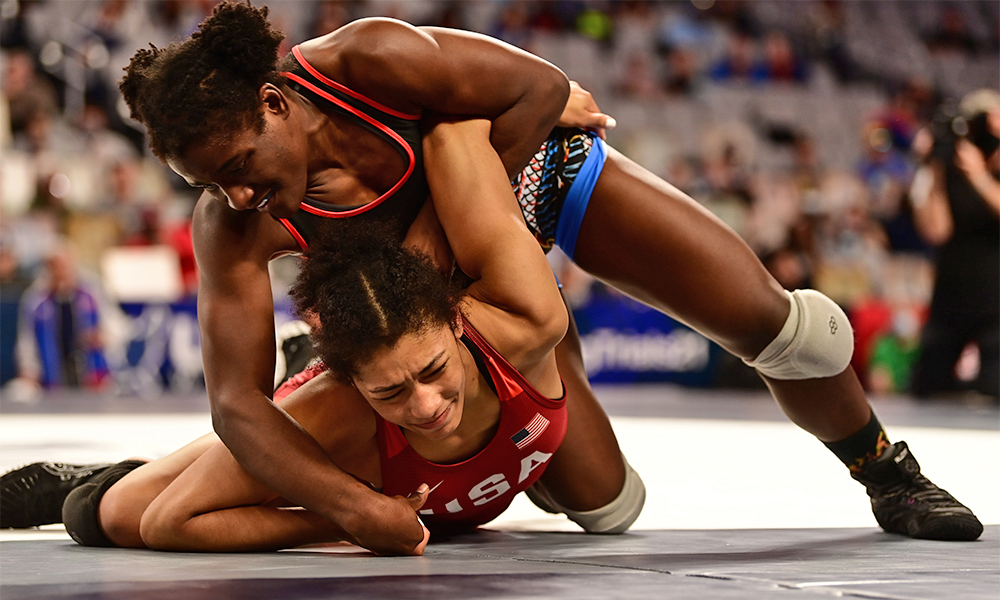 Tamyra Mensah-Stock was so happy at the finals of the U.S. Olympic Trials in Fort Worth, Texas on Saturday night that she couldn’t stop smiling or sobbing with tears of joy.

The 28-year-old from Katy, Texas won the Olympic Trials for the second time in her career at 68 kilograms (150 pounds) but this time, the victory brought with it a ticket to the upcoming 2020 Olympic Games in Tokyo.

Because she won the world championship at 68 kg in 2019, a win here at the Olympic Trials would automatically send her to the Games. Mensah-Stock swept spunky 17-year-old Kennedy Blades, a high school junior at Wyoming Seminary, 12-4 and 8-1. 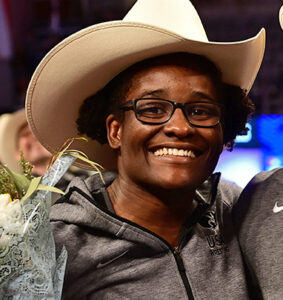 Tamyra Mensah-Stock will be representing the United States at the upcoming Olympics in Tokyo. (Photo courtesy Tony Rotondo / Wrestlers are Warriors)

“I’m not done yet. In 2016, five years ago, I wasn’t able to claim that title (Olympian) and now I did,” she said, halting to sob for a second. “And it makes me so happy. I ‘ve been wanting this and it gets tiring. It’s frustrating knowing that you are capable of doing something it is has been pushed back again, again and again. But it is finally here.

“I can call myself an Olympian and no one can take it away.”

Due to the COVID-19 pandemic, the Olympic Trials were moved to Texas from Penn State, where they had originally been scheduled to be held. For Mensah-Stock, it enabled members of her family and many friends to be scattered throughout Dickies Arena to cheer her on.

“I wanted to jump into their arms. It was definitely a moment of a lifetime. I do have some bigger moments to come,” she said smiling. “I’m ecstatic for them.”

Mensah-Stock thanked so many people for their assistance. She thanked God “for giving me the capability and the courage to go out there and actually perform and achieve the goal I (was) wanting.”

Yes, she stepped onto the mat as world champion and a three-time member of the U.S. Senior Team but that goal of Olympian had yet to be added to her resume.

“I had the chills, butterflies. I was terrified because I knew how bad I wanted it,” Mensah-Stock said.

She thanked her husband, Jacob, for his everlasting support. She thanked fellow Olympian Adeline Gray for “training her up.” She thanked her sister, Tarkiya, for introducing her to the sport at Morton Ranch High School and keeping in it.

“Tarkiya got me into wrestling and kept me in it because I wanted to quit,” Mensah-Stock said with a smile. “She is the reason I am here today and I want to thank her so much for making me not want to quit. This sport is so hard and there were days I wished I was still in track and field because wrestling is hard sport.”

In 2016, Tamyra Mensah-Stock did go Brazil for the Rio Olympics and worked as a practice partner for her American teammates. It will be different this summer.

“I am going to Toyko … and as a competitor,” she exclaimed in a post-meet interview with a big smile and few more tears.

Former state wrestling coach is No. 1 seed at U.S. Olympic Trials at 77 kg